Some of you may have realised that I wrote a files downloader for the brand-new LumiNUS. Check it out here if you haven't!

So, just like most entities with an old full-stack website, NUS has decided to upgrade its LMS (Learning Management System) from the full-stack IVLE to the separate frontend-backend LumiNUS! All new and shiny!

At that time, I wasn't excited by this since IVLE worked just fine, and I just wrote NUSIVLEBot, a telegram bot for push notification of announcements on IVLE. Many people in the NUS School of Computing would know about (and have even used) the IVLE LAPI. My NUSIVLEBot consumed it, the backend for Source Academy that I was involved in used it, and so does ivle-sync, a script to automatically download files from IVLE.

I was quite assured back in February 2018 when I checked the LumiNUS API page, which promised the release of “Powerful RESTful API documentation on Swagger” by March 2018. 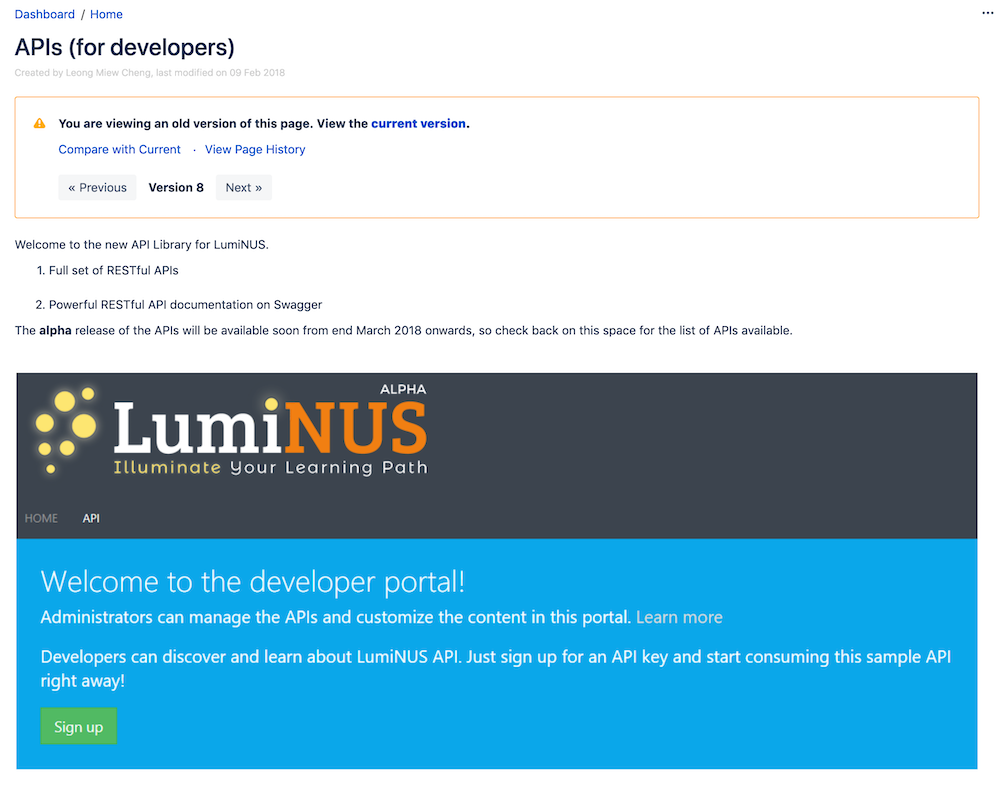 When March 2018 arrived, they updated the page to change the release date to April 2018. 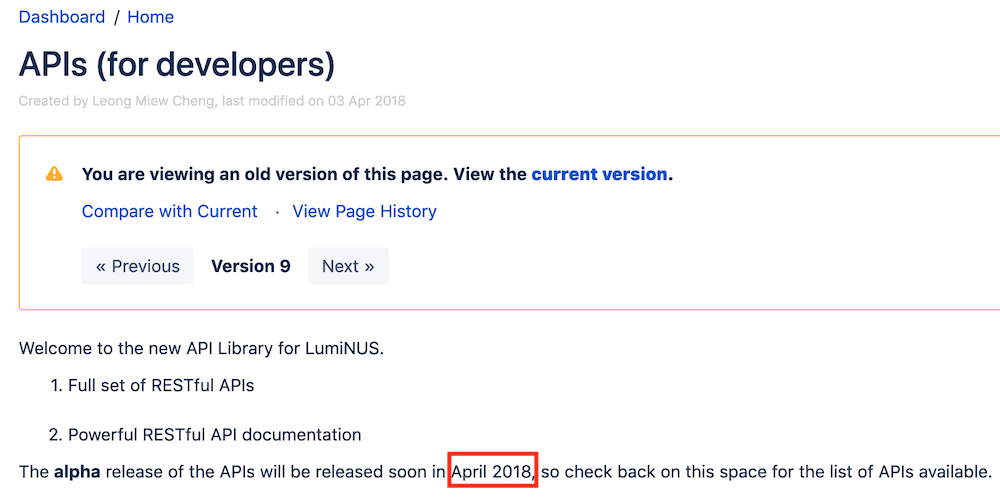 May 2018 came and went, but nothing was released. Then in June 2018, they again updated the page to change the release date to August 2018. 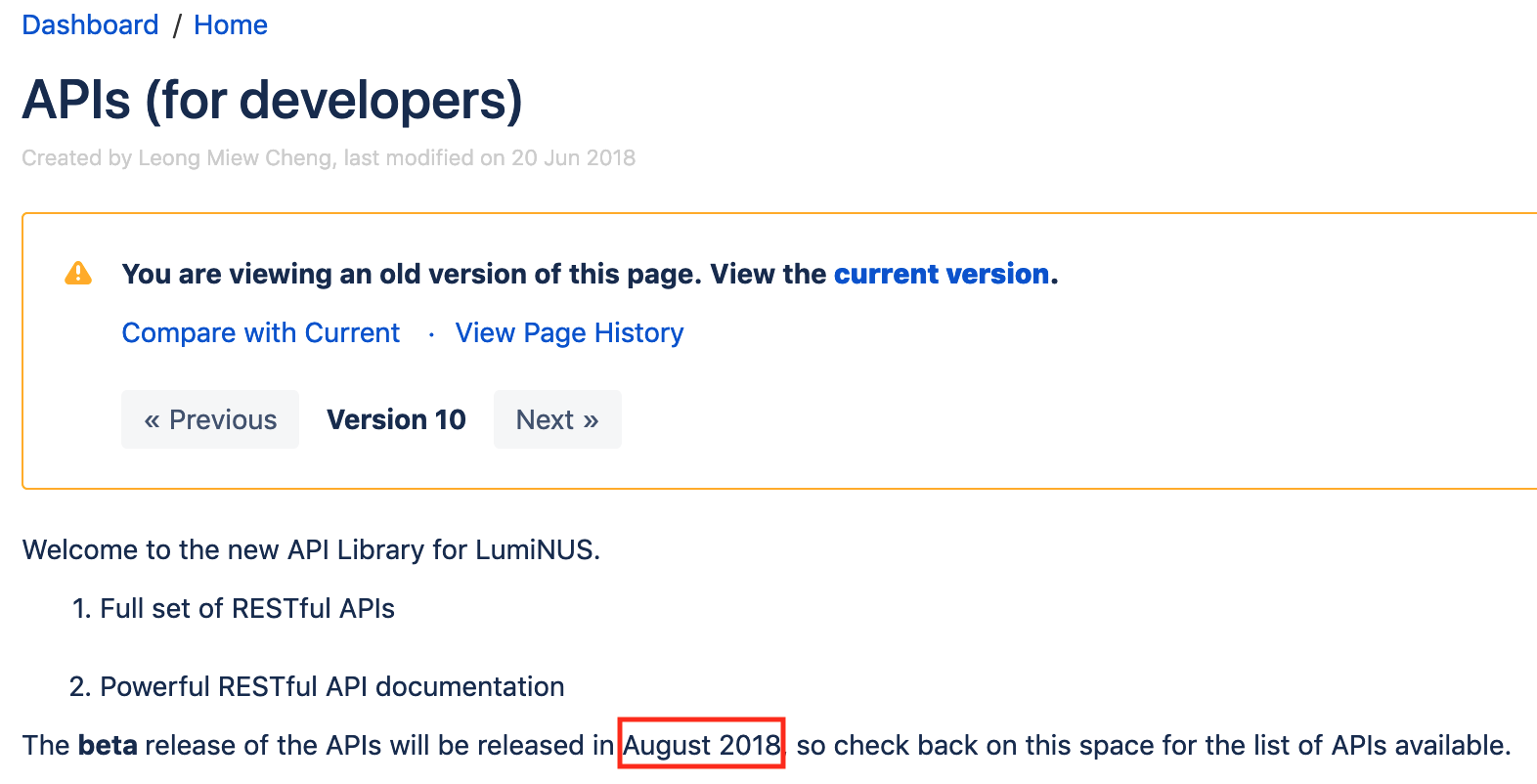 And then on October 2018, apparently they just gave up.

Meanwhile, the timeline given by NUS CIT is for partial phaseout of IVLE in AY2018/2019 with LumiNUS in beta, and full transition to LumiNUS in AY2019/2020. I released that if I were to wait for full API, I may not have time to actually implement things that I want to implement. So one random day in AY2018/2019 Semester 2 I just decided to reverse-engineer the IVLE API and build something similar to ivle-sync.

So I opened LumiNUS, and was promptly greeted with this announcement: 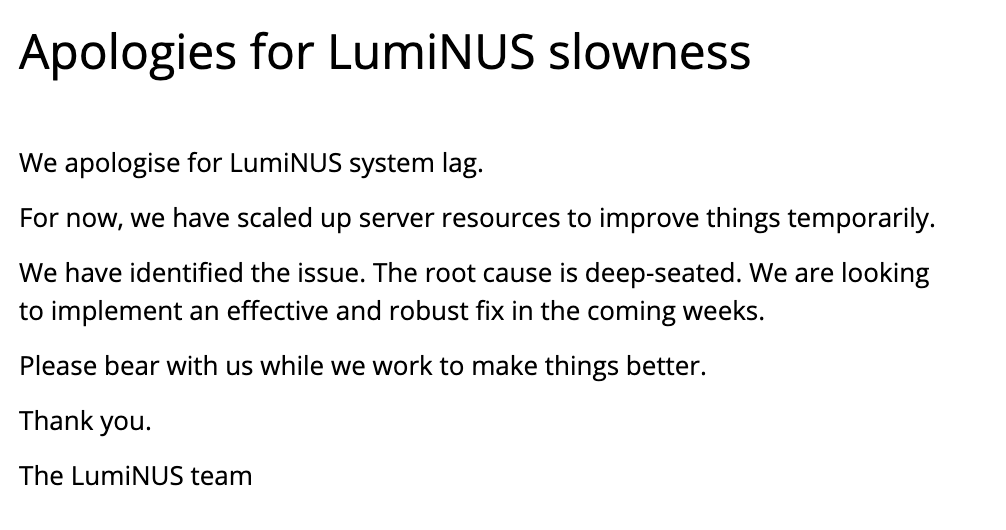 The root cause is deep-seated.

Heh. Just as I suspected, they did not write LumiNUS to be greatly scalable, probably with some O(n^2) or O(n^3) algorithm inside somewhere, calling the performance good enough for 10-20 people, and then deploying LumiNUS for all 40,000+ students in NUS. When I consistently get >5 seconds response time, it is clear that there's something wrong with LumiNUS’ design. 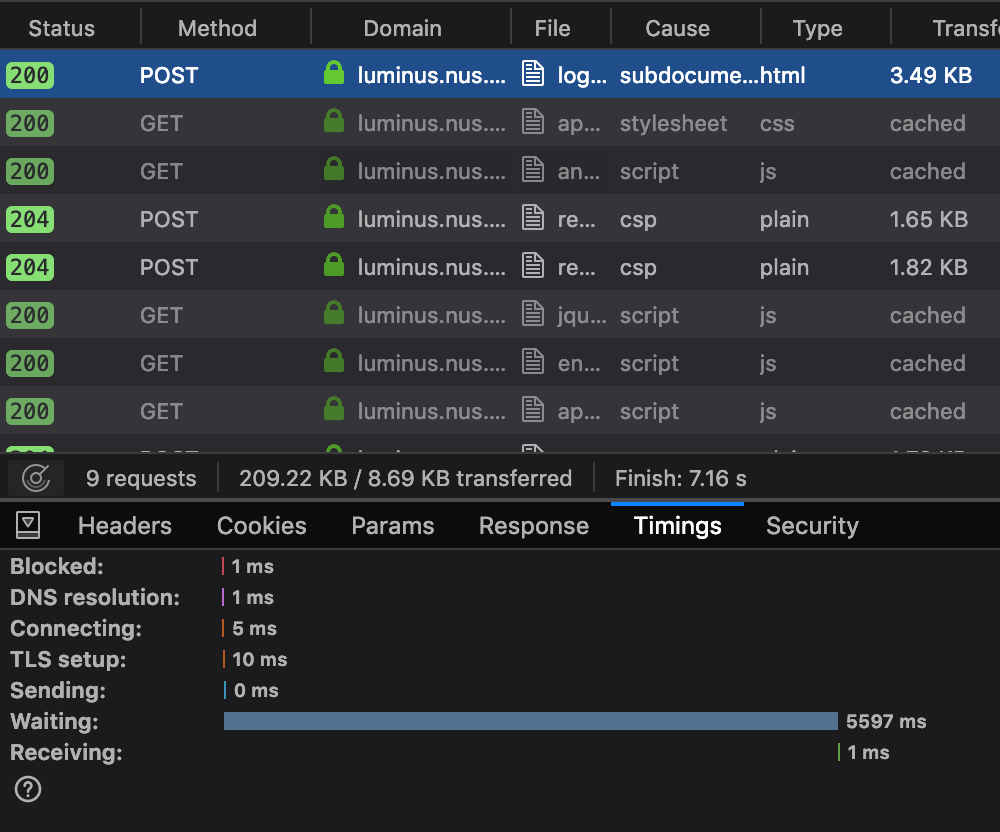 Rants aside, I started the process of reverse-engineering by looking at the source code. Apparently it's just an empty HTML page with scripts, so clearly everything in client-rendered. A quick search in the main javascript bundle revealed that the frontend was written using Angular.

Also interestingly, the main bundle is not minified at all. So I switched from Firefox to Chrome since the latter can actually read sourcemaps. And, voila! I can now see the webpack-transpiled code for LumiNUS. 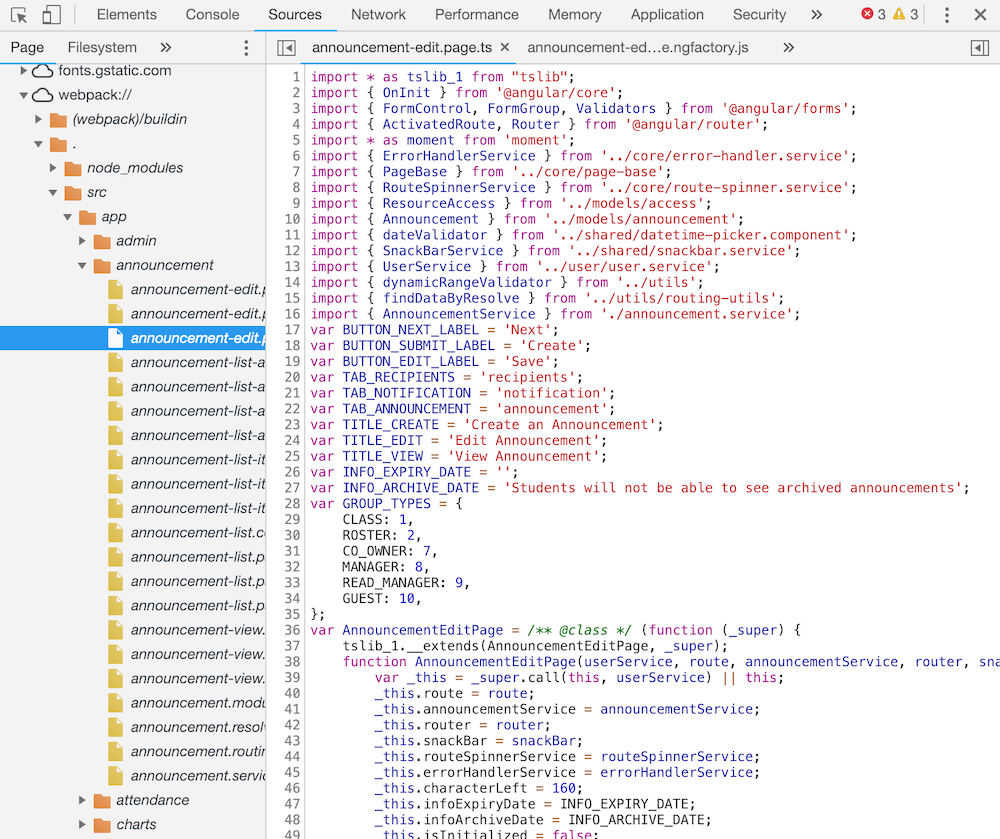 When going through the source code, I found this gem. 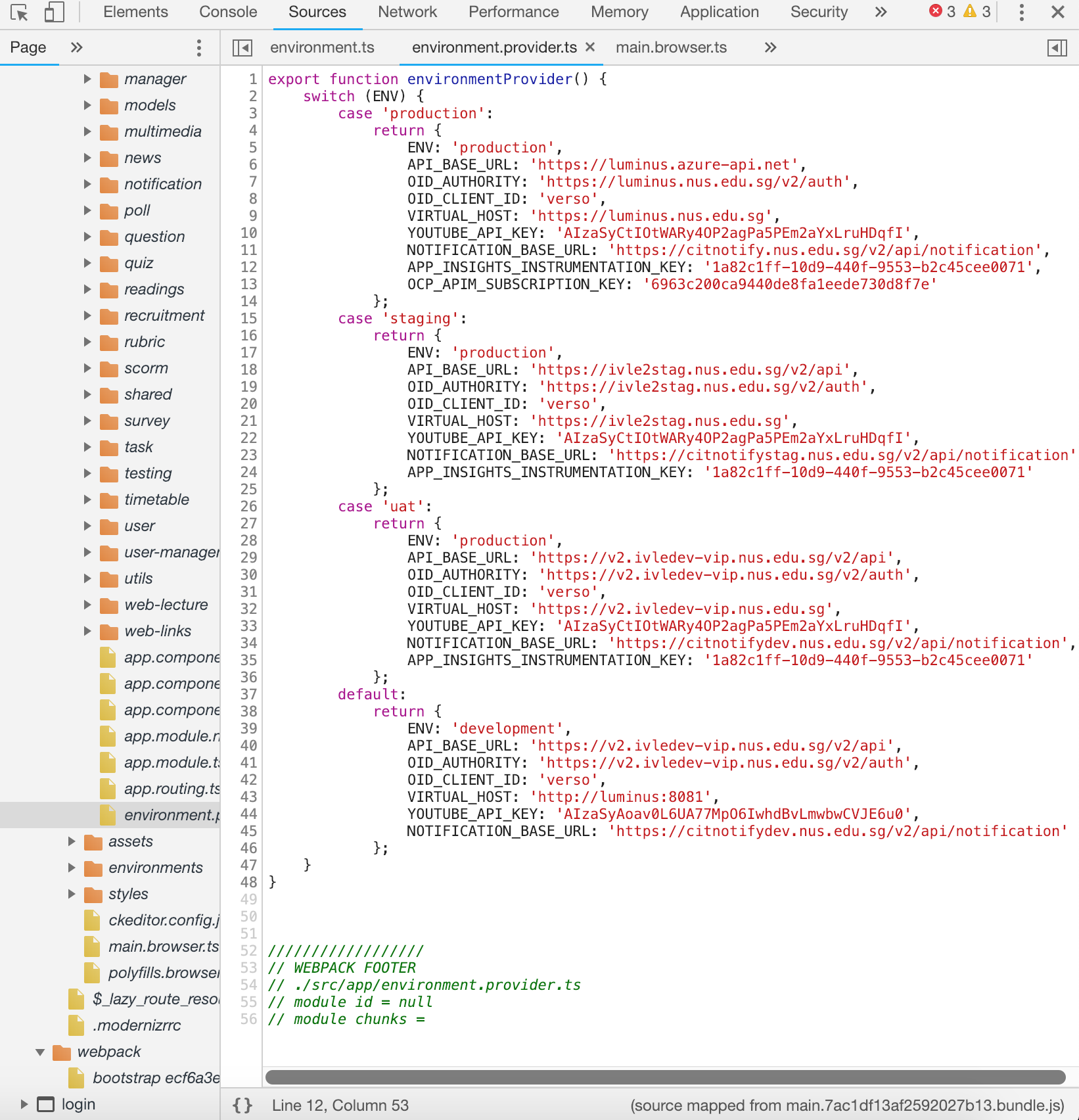 I did not really check what I can do with the YouTube API key, but I would assume that I will not be able to do much about it. However, I became quite intrigued at what verso is. So I googled with the term “luminus verso”, and found this company to whom NUS CIT has outsourced LumiNUS to. Sigh. I guess this is why LumiNUS is so bad, with slow backend and bad UI and UX for frontend. I might make another post in the future about how awful LumiNUS frontend UI and UX is. I wonder if Verso even has any designer in their team because the location and animation of everything seems like they were decided by the roll of a dice.